“So she came running to Simon Peter and the other disciple, the one Jesus loved, and said, ‘They have taken the Lord out of the tomb, and we don’t know where they have put him!’”  John 20:2.

“Finally the other disciple, who had reached the tomb first, also went inside.  He saw and believed.”  John 20:8.

Mary Magdalene and John both see the same thing; an empty tomb.

Their reactions to it couldn’t have been much more different.

Mary assumes that the Jesus’ body was stolen by someone.

John understands that Jesus is no longer dead and probably wonders where He now is.

My takeaway is the need to be careful with the conclusions I draw from what I see/hear.

I think that I have a sense of the Sherlock Holmes in me.  I like to take pieces and make them into a completed puzzle.  Sometimes I don’t have enough pieces in place and conclude mistakenly. I need God’s help.

John had spent nearly three years with Jesus.  He knew, based on what he had heard and seen, that Jesus had power over death.  If he had been asked prior to this event if Jesus could be raised from the dead Himself, John would have had no evidence to go on.  But he knew that Jesus had done remarkable things.  At the end of the Gospel of John, he says that he had only told a small portion of what he had seen Jesus do.  So when John saw the organized pattern of the linen, he did not assume that the body had been unwrapped and then stolen.  He concluded that Jesus had come back to life.

I need to keep taking close looks at Scripture.  I must continue to personalize it (“What do You want me to see?”) as I read it.  The more enlightened I get, the better I will be able to understand things as they come along.

Jesus appeared to Mary outside the tomb and her confusion ended.  She, too, now knew that He had left the tomb and was alive.

What an event!  The Jesus I follow is alive.  I’m not following the teachings of someone who is no longer with us, but instead a living Person.  He is indeed unlimited.  He has opened my eyes to Who He is ….. my Savior!

Conclusion: My understanding of His Ways increases as my trust in Him increases. 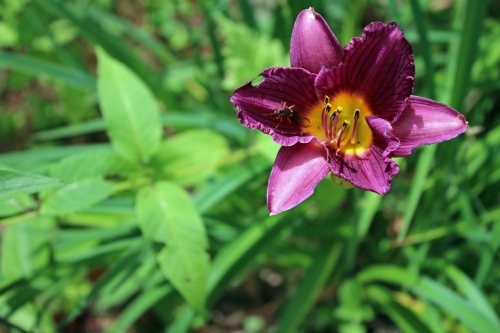